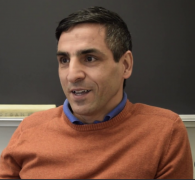 In this talk I will consider a moduli space of projective varieties enhanced with a certain frame of its cohomology bundle. In many examples such as elliptic curves, abelian varieties and Calabi-Yau varieties, and conjecturally in general, this moduli space is a quasi-affine variety. There are certain vector fields on this moduli which are algebraic incarnation of differential equations of automorphic forms. Using these vector fields one can construct foliations with algebraic leaves related to Hodge loci. The talk is based on my book "Modular and Automorphic Forms & Beyond, Monographs in Number Theory, World Scientific (2021)" in which the Tupi name ibiporanga (pretty land) for such a moduli space is suggested.