In this talk, we present results on the homotopy type of the group of equivariant symplectomorphisms of $S^2 \times S^2$ and $CP^2$ blown up once, under the presence of Hamiltonian group actions of either $S^1$ or finite cyclic groups. For Hamiltonian circle actions, we prove that the centralizers are homotopy equivalent to either a torus or to the homotopy pushout of two tori depending on whether the circle action extends to a single toric action or to exactly two non-equivalent toric actions. We can show that the same holds for the centralizers of most finite cyclic groups in the Hamiltonian group. Our results rely on J-holomorphic techniques, on Delzant's classification of toric actions, on Karshon's classification of Hamiltonian circle actions on 4-manifolds, and on the Chen-Wilczynski smooth classification of $\mathbb Z_n$-actions on Hirzebruch surfaces. 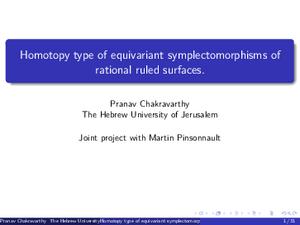