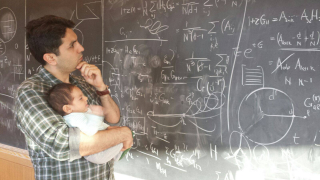 In an influential article from the 1970s, Albert Fathi, having proven that the group of compactly supported volume-preserving homeomorphisms of the $n$-ball is simple for $n\geq 3$, asked if the same statement holds in dimension $2$. In a joint work with Cristofaro-Gardiner and Humilière, we proved that the group of compactly supported area-preserving homeomorphisms of the $2$-disc is not simple. This answers Fathi's question and settles what is known as "the simplicity conjecture" in the affirmative.

In fact, Fathi posed a more general question about all compact surfaces: is the group of "Hamiltonian homeomorphisms" (which I will define) simple? In my talk, I will review recent joint work with Cristofaro-Gardiner, Humilière, Mak and Smith answering this more general question of Fathi. The talk will be for the most part elementary and will only briefly touch on Floer homology which is a crucial ingredient of the solution.